The Viral Tank is one of the many Irken starships - and a rather large one, at that.

Resembling a mechanized three-fingered hand, the Viral Tank is extremely large - not quite as large as the Massive, yet still quite so. Composed of four sections (Two armored 'tanks', the 'face/head', and the extension behind the 'head'), the Viral Tank is covered primarily in Imperial-Purple plating, shielding the darker, varying grays of the ship itself.

Emblazoned on the Imperial-Red plating of the 'Head' is commonly the Irken Military Insignia, and sometimes one can find one with the Irken Corporate Logo as well on the rear.

Specifications, purpose, and more may vary between each 'Fanon' or 'Fanon Series'.

With the general vagueness of the Viral Tank's capabilities, it can be necessary to make things up about it.

What exactly is made up can vary between each specific fanon or fanon series.

Information not available at this time. 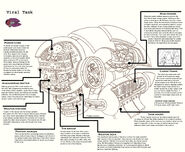