Edit
watch 01:36
We're Getting Mutants in the MCU - The Loop
Do you like this video?
Play Sound

"I never liked thermodynamics... Its limitations are so dull, aren't they?”

Born in the vast catacombs of Irk’s robotic smeeteries, Vex is an engineer, physicist, weapons contractor, and former Irken Invader. In the 287 years of his life, he has traveled the galaxy with the military, the Irken Science Program, and, more recently, every so often with a group of scattered compatriots.

As the inventor and contractor for large amounts of technology, Vex is well known throughout the empire, despite his reclusive attitude towards society.

Vex began life in precisely the same conditions as every other Irken, born in the vast system of smeeteries under the surface of Irk. After his standard military training courses, Vex was deployed as a foot soldier in an Irken Elite battalion led by the prestigious Commander Thresh. After a relatively uneventful but largely successful campaign on what would become Foodcourtia, Vex was promoted to the rank of Master Sergeant and recommended by Thresh for Irken Elite training on Devastis. Vex passed the Elite test with a high enough score to immediately enter as an Elite Sergeant, and he served for half a century as an Irken Elite before a plasma wound followed by a severe face laceration forced his removal from duty. During the incident, his entire squadron of Elite soldiers was killed in an ambush as well as an entire conjoining squadron. The injury landed him in a medical station, and at this station, Vex made a full recovery save for the characteristic scar over his left eye, which reveals very little about the severity of his initial injuries. Vex never discusses the injury, and rarely talks about his military history whatsoever. He maintained severe psychological wounds from the incident, traumatized by the slaughter of his squadron.

Aboard the medical space station, Vex took a mandatory intelligence test, as is protocol following a head-based trauma. Vex proved to have an incredibly high IQ, so high that an Irken Control Brain made the decision to have him transferred forcibly to a laboratory on the allied Planet Vort to work as a scientist. Vex consented and began his career as a scientist, now bearing the scars of war.

Vex’s research in the scientific community was almost immediately influential. After a failed attempt at a time machine prototype, Vex was able to glimpse and gather a sample of a fourth-dimensional molecular base, referred to by mathematicians as the theoretical particle “Tesseract.” This substance was immediately revolutionary, and with several lengthy patent processes brought Vex fame within the Irken Empire’s research community. With the substance, he was able to create extraordinary technologies with the potential to warp spacetime at will. The use for this substance, Vex figured, was a Tesseract-assisted engine system, which was produced in limited amounts for research and used in a few newer model Armada ships. These early engines improved over time, but were never cost-effective and could not be implemented into very many ships. Due to a lack of effective equipment and a lackluster interest in helping the empire, potentially sprouting from his military career, Vex decided to leave Vort.

As a result of his legal power over the Tesseract fuel used in some newer Armada ships, Vex had enormous bargaining power, enough to allow him to escape the forced work environment of the Irken Science and Research Program conglomerate and start his own individual company, which had rarely been achieved in the field of Irken scientific work. In the months following Vex’s departure, he was inundated with empty deactivation threats and bad business, and was unable to hire any workers due to his company’s autonomy.

Vex was able to purchase a scrapped space station and refurbish it using funds from his military career, but languished alone in the station for years, unable to find a contract with anyone and barely surviving by selling Tesseract fuel to the few ships that used it. During Operation Impending Doom Two, the Irken Science and Research center on Vort, responsible for massive weapon production, was destroyed, and the Empire reluctantly signed a contract with Vex for weapons manufacturing. Vex was finally able to purchase proper production supplies and hire the first workers, among whom were Plixx and Graf. The newly legitimized Vex Laboratories was able to push through old weapon designs as well as produce new ones, the vast amount of which were powered by the Tesseract fuel that birthed Vex’s scientific career. With advances in Tesseract technologies, these weapons rely on this fuel to create incredibly deadly projectiles capable of disintegrating nearly any substance.

Despite Vex’s scientific achievement and relatively high autonomy from the Empire, he remained highly reclusive and still struggled with psychological challenges from his military days. Upon meeting a discombobulate band of Irken vigilantes and touring the galaxy and fighting strange and obscure threats with force and with knowledge, Vex recovered significantly from his previous mental state, although he maintains a stoic and nonchalant façade to hide his emotional stress.

Vex is largely consumed by his work. Given its dangerous nature, he is often seen as extremely rude for his tendency to ignore everyone while he’s working, even his friends and high ranking officials. Vex generally treats people with respect, but he maintains a reclusive, stoic personality despite his internal emotions. Only when Vex has maintained a truthful relationship with someone for a very long time will he open up and adopt a more friendly demeanor. Vex is terrified of responsibility for the deaths and injuries of those around him, and often places himself in considerable danger while ordering others to keep at a safe distance. He nonchalantly brushes off such incidents in fear that he will relapse into the traumatic state resulting from his squadron’s slaughter.

During Vex’s long confinement alone in his space station following his escape from forced labor on Vort, he relapsed into an unhealthy mental condition. His recent contact with the likes of Jib, Schmoob, Menami, and Mario, among others, has helped him regain a sense of confidence in his actions.

Relationships --- WIP, info may be conflicting past this point ---[]

Vex despises the publicized nature of Operation Impending Doom Two, believing that compromising information is much more likely to leak.

Because of his importance, the Tallest granted him permission to install a bioelectricity manipulator into VIR.

Despite Vex not being all that much older than Zim, he must disguise himself as an adult Human on Earth, and a non-Vortian refugee when in the Vortian system.

Vex invented advancements in transmission equipment that allows any interstellar transmissions to travel past the speed of light, allowing for long distance calls throughout the galaxy while traveling near the speed of light. This technology resides inside all modern pieces of Irken equipment, including The Massive and all main control brains.

Vex owns a PAK-less clone of himself for an organ donor if he is ever severely injured. The clone is hooked up to a life support system to keep it alive.

Vex owns a battle cruiser called the Plague Runner and is a licensed fleet commander. He has a crew of highly trained pilots and gunners aboard the ship with him at all times.

As one of the main military equipment providers for the Irken Empire, Vex either has invented or can easily get his hands on equipment and weapons needed for each mission he completes.

"Just because perfection is unattainable does not mean we should strive for any less."

"The enemy is only another algorithm. Simplify it, solve it, and set it in its place."

"I never liked thermodynamics... Its limitations are so dull, aren't they?"

"What's more frightening: To know that the path is infinite, or to walk that path alone?"

Vex in his combat uniform

Vex and Jib in Return of the Meekrob... Again 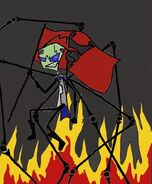 Vex, standing on his PAK legs

Vex, utilizing an electron manipulator grafted into his forehead

Vex fighting alongside ground troops in an Irken assault

Vex and Vax in The Growing Darkness

Vex, dressed in his standard outfit

Vex, at the tail end of his military career, in a fleet commander outfit

Vex as a newborn smeet

The extrasensory implants inside Vex's head

Vex, from a young smeet to his current appearance.
Community content is available under CC-BY-SA unless otherwise noted.
Advertisement