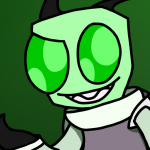 Welcome to Irken Empire Wiki, Invader Plazatrax! Thanks for your edit to the User talk:PrimusGod page.

Any questions? Contact me! And don't forget to sign your talk posts with ~~~~ or the signature button, it is REALLY hard to locate everyone on here without the sig. -- InvaderMEEN (Talk) 17:55, 12 October 2012

Please do not mark fanon pages as article stubs. Only the original creator may add content to fan-made pages. PrimusGod (talk) 13:05, October 20, 2012 (UTC)

I know this is alot to ask, but you seem very good at O.C's and Fanfics and stuff like that, so I was wandering if you could help me become a better fanfic maker? I know it's alot, but I need some help with them as I have never done one until today (Invader Et) and I could  use some help from ME!

Thanks, the funny thing is invader et is supposed to be based on me :) great tips! From: User:Projectgir

Hi! So I noticed you left me a message saying if I needed any help with anything I should contact you. Really, right now I'm just going to try and figure as much out as I can, but thank you for the offer! Invader Mas (talk) 02:15, January 17, 2013 (UTC)

Invader Zak here. Thanks for adding me on the list of invaders. I just want to know now how to get a planet to conquer. I would very much like to show how thick invasion runs through my blood transport system. I guess you can leave a reaply on my talk page. OH! Also how do you make a profile page for your irken separate of your talk page? Please and thank you. Invader Zak (talk) 23:59, March 20, 2013 (UTC)invader Zak

Invader Zak here. Thank you for helping me out. I suppose the challenge now is choosing which HORRIBLE place I want to bring down to it's knees. I'll comunicate with you later and hope that we can work together in the future. I AM ZAK! Invader Zak (talk) 05:26, March 28, 2013 (UTC)invader Zak

Nice KRONOS Unit.. i may be able to make a design of the KRONOS unit more IZ style, but it may be hard.

Hey im kinda new here, you might now me as "nightmare Xenathu" but i'd rather you call me Nex and if you wanna chat you know were to find me. But if you don't want to talk to me cuz ima nightmare irken than oh well, I can just talk to nightmare you lolXenathu (talk) 06:37, May 5, 2013 (UTC)

Would it be okay if I use Plazatrax in my articles?

Did you hear that Reant tried to rip you off by creating his own KRONOS Unit? Good thing it ended up just being an Irken.

Thanks for letting me use Plazatrax in my story. It's actually my first story.

Congratulations on becoming admin. I wish I had time to be more active on here, but with my current jobs, I don't have time to be. :c May you continue the success of this wikia with ease! PrimusGod (talk) 09:39, July 24, 2013 (UTC)

Greetings, Plazatrax. Congrats again for the promotion to admin. I was wondering if you now have the authority to promote other members? If so, I think that Vax and (perhaps) myself could also be more useful to this wiki as admins as well. That is if you feel it would be a good course of action. Well, off to conquer... Invader Vex, signing off! (talk) 22:40, July 28, 2013 (UTC)INVADER VEX

I never did vandalisim,Jib convinced the others that my fanon wasn't canon and that it should take lace in another universe,leaving me out. I'm already dealing with stuff in real life,I have some crap on ROBLOX too. But I donot want the wiki and my own fanon to be tooken away from me or "singled out" of the others. If I meltdown,I'm sorry,I'm dealing with stuff these days. Mysteriousjillguy (talk) 01:20, August 16, 2013 (UTC)

I never convinced anyone that his fanon isn't canon, I simply suggested that he change his fanon's timeline so it fits with the rest of the fanon on this wiki. Do not listen to his lies. Invader Jib (talk) 01:25, August 16, 2013 (UTC)

I spent YEARS on my fanon,and I am NOT recreating it,so its either we try to work together and blend our stuff together,or my fanon is useless. And most importantly,they are not LIES,suggested? Haha you told me it was my fault for not sticking to canon,another dimension was the only option due to the fact that the entire ROBLOX Website has all kinds of different alien races and planets. The irken ROBLOX war group started in 2009 so that's a long time. We had wars and disasters,so it couldn't be recent. Mysteriousjillguy (talk) 19:09, August 16, 2013 (UTC)

Well, our fanon does not take place centuries after the series, and we will not change it just to fit with your fanon, as you are the only one with such an extreme timeline. Also, Robloxia is one planet, plain and simple.

By the way, the only part of your fanon that is original is Lurk's backstory and Nightmare Lurk, the rest of it is just based off of random Roblox users and stuff from Roblox.That doesn't take years to create.

Its fine Plaz,its not your fault.

I'd like to join your project to add all missing major canon stuff. I already made a page for the Spittle Runner.

LIR is continueing to vandalize pages as a wikia contributor.

That IP adress thing is very strange,maybe I wasn't logged in.

No, LIR has been editing sevreal pages without out pemission, and adding LIR and Anit-LIR to the relationship sections of them.Invader Jib (talk) 02:03, August 23, 2013 (UTC)

Plaz,JIb and I can't get along. And he unfairly banned me from chat. I suggest de promoting him or punishing us both. Mysteriousjillguy (talk) 00:51, August 30, 2013 (UTC)

I had several reasons to ban him. He is lieing.

If you plan to punish me and Jib,by all means. Do it. I deserve to be punished...

Jib has commited the same crimes as I have,he also was disrespectful,we were arguing,so we are BOTH gulity. Mysteriousjillguy (talk) 01:06, August 30, 2013 (UTC)

The crime of threatening a mod,however,is a LIE. I never threatened Jib.

Threatining doesn't directly refer to the act of real life threatining. You repeatedly said you were going to report me to Plazatrax just for fairly banning you, therefor threatening me. I was not disrespectfull to you. Sure I insulted you once,but you did it to me repeatedly, reaching the point of beng blatantly rude. I'm not going to make an exception for you just because I don't get along with you, that's silly. Argueing does not neccasarily mean I was being disespectfull, I have the right to state my opinion.

For the las time JIB! I didn't SPAM! I just happened to say the same statement 2 times. If I was spamming it would fill up the whole chat! And when I swore,that was weeks ago and plazatrax gave me mercy! When Plazatrax comes back,he's gonna do something about this! And I don't care if he punishes us BOTH! Mysteriousjillguy (talk) 10:51, August 30, 2013 (UTC)

Plaz,I never spammed and my past offenses don't matter now because you've forgiven me for them. If I was truly being disrespectful so was Jib. We were in an argument. Mysteriousjillguy (talk) 10:53, August 30, 2013 (UTC)

"Swearing will 'not put you on the "banned" list, but it is highly looked down upon." Ah ha! See Jib! Cussing isn't against the rules! Although I only do it when something has made me very angry. Mysteriousjillguy (talk) 10:56, August 30, 2013 (UTC)

You were also being disrespectful,1 insult or 500. So if that's really a problem,we're BOTH guilty. And if you're saying I can't argue with a higher power,are you saying I can't state MY opinion? Also,I recall YOU saying several insults. Mysteriousjillguy (talk) 10:59, August 30, 2013 (UTC)

Lurk is vandalizing pages, he vandalized all of his fanon and the Robloxia page. I undid it, but he's most likely going to do it again. Please ban him.

Hello, Plazatrax. I was wondering if it is possible for you to transfer the ability to make polls to us Chat Moderators.

May I refer to the Irken empire wiki in my new wiki ? Perhaps it could act as a sister wiki? I'm using it to hold all my fanon,it'll be mostly for crossover stuff.

Thanks for the clarification... Who is it that can give you the power to edit the front page? Only Meen?

Jib, Ark, and I were thinking, and we have decided that it would be good to have a section about plagiarism in the Invader Code of Conduct. There have been several examples of stolen pictures from the web and articles from Invader Zim wiki, and I believe we need to stop this from happening any more. When pages are simply copied from the IZ wiki, they relate too directly to the series, which makes them irrelevant to the content on our wiki. Jib and I have already began to rid us of these pages, but we need a rule to make sure they do not keep coming up.

Why am i not allowed to chat? I didnt do anything. Was there some sort of mistake?

@LIR I banned you for extremely disrespectful behavior, an example "you are the trash." I was reccomended by Vex to ban you. OH, so THAT'S how you make a signature! Okay, I've gotta think of something.WAIT-DON (talk) 23:04, September 24, 2013 (UTC)

Yes. I hope you are not too angry at us, but disrespectful behavior like that cannot be tolerated, even from a friend. That was quite insulting to Jib. Well, back to my filthy evil, I guess... (talk) 03:18, September 25, 2013 (UTC)INVADER VEX

Find  the user, Taylpstudys around this wiki she's super mean and please ban her or something look at these posts:http://irkempire.wikia.com/wiki/User_blog:Mariastudys

Congradulations on making it to admin status. The last time I remember talking to you you said you were going to look into becoming one. It's a good thing too because the site really needed it.

So, I noticed on your blog post that you'll be gone this month... Do you want me to do anything for you while you are gone, like write the Admin blogs? Let me know if you do.

I'm afraid I don't have time to remake these articles from scratch. This is my signature,I am an almighty wiki member! THIS IS WHO I AM! Ahahaha ahahAHA (talk) 03:39, October 26, 2013 (UTC)

How do you upload a video to a wikia?

I am the newest Invader here.

I shall create a page for me, my cruiser, and my SIR unit.

Hello! as the page says I need to contact an admin to become a full on "Invader". Is this how? If it is thanks in advance

Hello, thanks for welcoming me, if you didn't notice my reply on my page. I wanted to say that I'm really excited to be part of this community, and I've made art for Avi, SO IT IS TOO LATE TO TURN BACK! AyanOwO (talk) 21:43, October 14, 2019 (UTC)

Retrieved from "https://irkempire.fandom.com/wiki/User_talk:Invader_Plazatrax?oldid=44862"
Community content is available under CC-BY-SA unless otherwise noted.