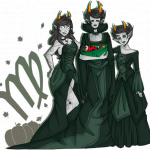 I talked on InvaderPD's page Edit

Invader Thorn here. I couldn't help but notice that you are unaffected by lack of earth-sleep. As am I, so most likely if you get bored late at night i *should* be online...and I should appear in the chat bar...so feel free to chat me anytime you feel like it!

1. Have earned the "Almighty Tallest" Badge or higher (check!)

2. Prove to the current admin(s) that you are trustworthy and kind (half-check)

3. Know what admins really do.

By becoming an admin, you will get these priviledges:

but you will not be able to:

The responsibilities of an admin:

If this sounds good to you, then sure! You definitly make a good canidate for the CB team.

PD GET ON CHAT NOW ok its dell

Do you want this to be a private chat, or do you mind that I talk to DesertedStoneMaiden at the same time as well?

And also, what time? I need to know your time zone (or what time in Zulu time is good for you)

Hiya PD Wanna chat with Tak (Moss) And I on the IZFS wiki? hope to see you there bye~ Zeel,Out! InSaNiTy RuNs DeEp

Hiya PD,would you like to come to chat? Im the only one here at the moment.and yes its the chat here. Zeel,Out!

Sorry if I have seemed unresponsive. I am not permitted access to a computer (mobile or otherwise) on Sundays. The Control Brains feel that I do too much meddling on the computer, and don't want my cover blown. Also, I will need to restrict chatting to half-hour increments. I am very busy at this time, so I hope that you understand. That was another AMAZING message, from ME, InvaderMEEN!Contact me here! 07:39, October 17, 2011 (UTC)

YOU KNOW WHAT GRINDS MY GEARS..Edit

WHEN MY GEARS DON'T GRIND!

If you use so much as utter more than one syllable, I WILL HUNT YOU DOWN AND GUT YOU LIKE A FISH! If you like to fax me, press the star key.

My human disguise is programmed to be half-asian, yes.

me and mikio Edit

Okay, please try to refrain from using curse words, because you are an admin, I would like you to set a good example. 'Kay? Thanks.

Hi it's me invader bart I can't sine this be cuz (I think that,s how you spell it) I'm on my phone and can't log in. now how do i put the biography stuff under my picture? And how do I get a planet to conquer? Hope you can help

you; que no entiendo

dsm; sandra , what are you doing, that is no way to talk to your sister,what would master say...

PLZZ CHAT WITH ME TOMMORW!!!!

How do I ship my charatar?Edit

Thanks for the tip, though I was only editing/correcting page mistakes. PrimusGod 16:12, November 5, 2011 (UTC)

Yes, I'm quite aware of that rule. After all, I DID read the rules. And that's all I've done when correcting grammar/capitalization and the such. PrimusGod 17:52, November 5, 2011 (UTC)

what waht hat what what Edit

If I could write you a song, and make you fall in love, I would already have you up under my arm. I used to pull all my tricks, I hope that you like this. but you probably won't, you think you're cooler than me. you got designer shades, just to hide your 04:32, November 6, 2011 (UTC)Yes. Yes. Yes.Are we still going out?

If I could write you a song, and make you fall in love, I would already have you up under my arm. I used to pull all my tricks, I hope that you like this. but you probably won't, you think you're cooler than me. you got designer shades, just to hide your 04:35, November 6, 2011 (UTC) I live on 5362 Mc.Glashan st. ok

Take a look at this: http://irkempire.wikia.com/wiki/User_blog:PrimusGod/Character_Fanart I posted your character. PrimusGod 15:08, November 6, 2011 (UTC)

Ah ha! caught you! get on chat!

Sorry i can't go todayYou're my Honeybunch, Sugarplum Pumpy-umpy-umpkin, You're my Sweetie Pie You're my Cuppycake, Gumdrop Snoogums-Boogums, You're the Apple of my Eye And I love you so and I want you to know That I'll always be right here,I LOVE YOU 23:34, November 6, 2011 (UTC)

I got a presant for you i'll have Kayla bring it to your school ok. >:3 ~EthAn~

Her edits are justified. Leave her be. If you don't beleive me, read the rules.

I saw what you posted on InvaderMEEN's talk page, and I love to be the bad guy to say that not everyone is going to like you. Heck, I don't like you enough to be good friends. Just because you're not the center of someone's attention doesn't mean you have to leave the wikia. Not that I'm not supporting your departure or anything, nor encouraging it. And complaining about it to MEEN in the first place is plain unprofessional. He has better things to do than to tend to your social needs. PrimusGod 20:25, November 7, 2011 (UTC)

This organization is not OHP. Edit

PrimusGod is right. I actually have lots of things I have to do, just within this organization. Do you realize that this is a GLOBAL organization? We have at least 3 other branches, and I practically have to single-handedly manage them all, since InvaderSzar unexpectedly went silent. Remember, I get emails about everything you guys do on here. I also would like you to remember that you are still in your probationary phase, in which I could revoke your admin privileges at any time if I see that you cannot handle being an admin, which so far, you haven't. That is not a threat, but merely a reminder. This organization is not Operation Head Pigeons 2.0, where the adminS have time to post updates every few days. This is an organization where the admins are lucky at all to get on because their time is far too little. That was another AMAZING message, from ME, InvaderMEEN!Contact me here! 21:04, November 7, 2011 (UTC)

Cool it down, PD. Copyrighted images are allowed to be used as long as the user does not claim it is theirs, or they don't try to profit off of it/redistribute it illegally. PrimusGod 23:54, November 13, 2011 (UTC)

Knock it off with the baby talk. Unless you have proof, screencapture proof, she is innocent. PrimusGod 23:58, November 13, 2011 (UTC)

It's done and over with. Things don't work out in ways like "witnesses of other users". It's either screen shot evidence or nothing. Besides, it's not going to affect the lives of anyone. PrimusGod 00:01, November 14, 2011 (UTC)

I know much more about copyright laws than you. You can use copyrighted material as long as it's not for profit, etc. etc.

Now stock art, you can use in your works and still gain money off of it.

Cry me a river. This is not how I treat my students. In fact, this is how a mature adult is acting. Since you've not experienced adulthood yet, you wouldn't know how one acts.

This is your first warning. I'm also leaving Dell-taco a warning. If you continue to argue about this, there will be consequences. PrimusGod 00:13, November 14, 2011 (UTC)

I'm not trying to use scare tactics to intimidate you. I am stating what is factual and what will happen to you if you keep acting like this.And I don't pity you one bit. You're a liar, and liars are scum of the earth. Lying about leaving "just to see how people would react" is pathetic and low. PrimusGod 00:38, November 14, 2011 (UTC)

Again with the lying. You were the one who first posted you were leaving forever. You're losing all credibility as an admin, and any respect you may have had is long gone. PrimusGod 00:42, November 14, 2011 (UTC)

Okay, that's enough messing around with the "mommy" thing.

I regret to inform you that you, effective immediatly, are to be released of your privledges and duties as an administrator. I didn't want to have to do this, but you have shown me that you cannot handle being an administrator.

Could you post a link to this image? Thank you.

Friends and such Edit

Now you're really irking me. Not everyone has to be your friend. There are different levels of friendship. Not all friends are the perfect friend. You want everyone to be the perfect friend, and when nothing goes your way, you take it out on InvaderMEEN. Just because you basically got told off in the chat, or having a bad day, does not mean you take it out on someone else who had NOTHING to do with it. You have to remember that MEEN has a busy life outside of the wikia, and can't take the time to individually sort out everything that happens on the wiki every day.

Also, it wasn't about using tools. In fact, some of the greatest admins don't have to use their tools once. It's about knowing how to be an admin while respecting the individual rights of others. It's also about acting maturally in response to certain events and/or actions. What you lacked in that field lost you position as an admin. PrimusGod 09:28, November 15, 2011 (UTC)

I LOVE YOU, LET'S GO TO THE MOVIES AND SEE BARNEY IN 3D.

And that's understandable. But there are people out there such as myself who are not as friendly as other people, and will not take to making friends as easily as you. You gave yourself such a negative connotation that it makes me not want to be your friend at all. PrimusGod 10:05, November 16, 2011 (UTC)

I just noticed that you are active on the wiki. You are supposedly supposed to be grounded. PrimusGod 10:09, November 16, 2011 (UTC)

PD! Im uploading my vid about zara in youtube right now!!!I Will be in the darkness all alone i will shred my tears in KILL YOU DOWN IN YOUR MONITOR. 09:03, November 18, 2011 (UTC)

http://www.youtube.com/watch?v=qNKpg2JhCPQ THE FINISH VIDEO!!I Will be in the darkness all alone i will shred my tears in KILL YOU DOWN IN YOUR MONITOR. 09:15, November 18, 2011 (UTC)

Do not EVER use another user's account without permission. I don't care if you see an opportunity to, such as them leaving and still logged in. If I ever catch you pulling a stunt like this, your account will be banned for an indefinite amount of time, and possibly, your IP. It is not just against the rules of this wiki, but against the rules of EVERY wiki, and you are breaking the number one rule. PrimusGod 15:41, November 18, 2011 (UTC)

Okay, obviously there's some friction between us for some reason...

What exactly did I do to offend you? All I did was withhold my location. I have a right to privacy, you know. I can't just stick all of my mission details on the Internet!

If you think about it, it was all you. YOU demanded my location. YOU wanted more from me then I could provide. YOU expected me to be your boyfriend. YOU set up all of these fantasies in your head that I was a knight in shining armor, when in fact I am a VERY busy person who is lucky enough to even be on Wikia!

So all in all, you have no one else to blame but yourself.

Retrieved from "https://irkempire.fandom.com/wiki/User_talk:InvaderPD?oldid=12861"
Community content is available under CC-BY-SA unless otherwise noted.