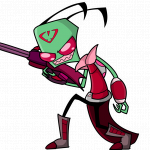 506 Edits since joining this wiki
March 17, 2013
0 Discussion posts
Zak is an Irken elite with the intention of starting his own empire in the name of Irk. He beleived that if there was two separate groups then they could conquer twice as fast and call on eachother when they needed help. Due to his amazing ability to think for himself he was marked as a defective and shipped to a mind correction facility. Because of his incredible intelligence, he was able to fake his way out of his treatments and start training as an elite.

After going through the long training programs he gained a mass amount of knowledge in combat and was a well known engineer among his peers. He spent a lot of his time working on improvement programs for SIR units and weaponry. He found a way to successfully use green plasma as an effective weapon and energy source.  He is extremely loyal to the empire, doing everything he can to aid in the goal of galactic conquest. It is currently unknown if he still wishes to go his own way or not.

Height- close to the same as the almighty tallest

Eye color- bright green with a sunburst ring in both eyes. ( extremely rare for Irkens ) The sunburst is gold in color.

Clothing- standard Irken uniform. Maroon tunic with black pants. He wears an engineering coat when he's working. The coats color is close to Earth military camo. His uniform is sleeveless. Goggles are a neccesity. He always wears goggles either on his forehead or, when he's working, over his eyes.

Weapons- anything he creates

Personality- his personality can only be discribed as split. He often changes how he acts and talks to himself quite often. To humans it would seem as though he suffered from schizophrenia.

Skin- his skin is a very pale green. Almost blue-green.

Boots- his boots have a unit built in that lower the gravity around his body to alleviate stress on his body since he is so tall.

Vax- He and Vax are good friends. They both work on planet Vort and are considered geniuses to their peers.

Zara- He is good friends with Zara as well. He excepts her as his superior and will help her out in any way he can.

RIS- RIS is his SIR unit he built himself. He thought he would stand out being a male with a female SIR, seeing as how he had only ever seen male SIR units but found that many other invaders had female SIR units. She is loyal to him and he still thinks she is unique in some way.

Retrieved from "https://irkempire.fandom.com/wiki/User:Invader_Zak?oldid=15629"
Community content is available under CC-BY-SA unless otherwise noted.