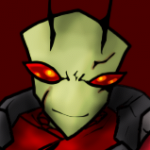 Who am I? Edit

I am Cravitus, veteran of nearly two years of the series known as Irken Conquest.

A merit that, admittedly, pales next to the majority of my peers on this wikia.

I've written hundreds of thousands of words in a cycle of revision and enhancement, writing in a tone more serious, yet ironically rather adherent, to the predefined world of Invader Zim. I intend to keep writing for as long as I see fit, having been dabbling in the Invader Zim fanon since 2010 in numerous ventures.

However, it's rare that someone ever starts perfectly, with my earlier written ventures little more than garbage.

Today, my works tend to focus on characters such as Averii, a banished Invader, or Mydra, a Psionic Mercenary, aiming more to be character-driven than plot-driven. Not that it stops me from going the other route, however.

I myself am a user bound to the currents of watersports, my duties to governing and developing for other fangroups, as well as my academic obligations. Sports, Groups, Schools; I've got a life, as do many others.

In short, I do have other priorities that can get in the way of my activity here.

I'm a bit sensitive to what I perceive as clichés, edginess, and generally poor writing, so be warned. I've been too lenient in the past towards those exhibiting these issues, letting them slip by without so much as a sound. I aim to raise my objections, now, yet I plan to do this in a way that will help fix those issues.

I do judge people. Everyone does, though, and I intend to help them with my judgements.

I'm also a bit sensitive to being flat-out ignored, and to go without feedback.

Without feedback, you have little to no grasp on your quality aside from your personal judgement, and personal judgement is too easily corrupted by personal bias, and at the same time easily made ineffective due to indecisiveness and a lack of trust in one's own abilities.

What I mean is, you can't improve if no one tells you what they think you're doing good - or doing wrong.

Notably, in terms of my social interactions, I tend to favor more casual conversation. I speak in the third person, use a diluted version of my own name, Krev, and throw almost any sense of punctuation and grammar out the window.

I'm normally pretty casual, and won't bother with grammar and all that garbage.

Be warned, if I even use a single instance of punctuation, capitalization, or any other structure-related item, I'm likely in a less than pleasant mood.

So, generally, I'm a guy with a life who can make critiques, doesn't like to be ignored, and I'm also normally casual. I've also got a decent vocabulary, and can argue for ages over something as small as feedback.

Take a look at some of the things I've done here on deviantart, if you feel you're up to a fraction of what I usually do.

Retrieved from "https://irkempire.fandom.com/wiki/User:Cravitus?oldid=43672"
Community content is available under CC-BY-SA unless otherwise noted.