Known more commonly as the Lacerator, the Type 223 Rail Rifle is an Irken semi-automatic weapon designed to hurl superheated magnetic ordinance at very high velocities downrange, commonly at targets. Usually wielded by Irken Specialists, marksmen, and snipers, it's spawned a few different variants over it's years of service.

Magnetic Accelerators and the Chamber Edit

To load the chamber, one must notably utilize the break-action nature of the weapon to insert munitions, with hinges located right above the trigger.

Designed to be held with two hands, most Lacerators are rather heavy and are commonly used by Marksmen and Specialists as a varying-range precision weapon, and more rarely as a devastating anti-material weapon.

It's purpose is, as quoted; 'Make you die screaming'. Accurate, fast, and relatively quiet, it's normal output of metal needles measure about the size of an Irken Fist. Coupled with their superheated nature and often excessive velocities preferred by marksmen, they often did make their victims die screaming. Wounds caused by the standard ammunition were large and horrendous, exceedingly challenging to treat, and limbs went missing.

Thus transforming a precision anti-infantry weapon into an ultra-precise lobotomizing tool, capable of punching through some of the thickest armor there is. Try stopping that, shields.

However, between it's weight, cost, and tedious maintenance requirements, the T223 is relatively uncommon, with lasers and plasma-based weaponry seeing more widespread use.

Issued by personal request, the Lacerator-H possesses very heavy (but very powerful) components, as well as an enlarged power cell within the large handgrip below the barrel. It is, as it's name states, heavy. Both in weight and in power.

The barrel is longer, with more components lining it, and the munitions tank/chamber has been extended forward, accommodating both bigger, faster, and thus, deadlier, rounds. The handgrip itself is enlarged a bit, as stated, containing the larger powercell, and also serving as a more comfortable grip for the weapon.

Typically, velocities are so high on this firearm, it doesn't matter if you're firing special ammo or not; whatever's hit is going to be having a pretty awful rest-of-the-day, be it infantry or armor. Trails of red plasma are seen invariably following each hyper-velocity shot, emphasizing the weapon's lethality.

Recoil is immense, however, even after the initial shock being absorbed by the barrel kicking back.

Capable of propelling a metal spike through solid armor plate and concrete at 250 rounds per minute.

Heavy versus other rifle-based weapons, the T223 is a bit longer than the average Ventilator rifle, but with incredible power. While not wielding the sheer strength, capacity, and speed of the Lacer-H, the stock variant is still nothing to underestimate. With the advanced scope and relatively plentiful (if unorthodox) ammunition, in addition to the power of slinging metal spikes at over 3,000 meters per second, the T223 is very accurate, and very deadly.

Velocities are comparatively average between the three variants; however, that doesn't mean that it's any less dangerous. With the immense velocity of each round, ghostly white contrails mark their paths, and plasma begins to form around the spike; a phenomenon that intensifies with the H-Variant.

Sends steel downrange, through armor, and deep into concrete at 165 rounds per minute.

Special Issue to Irken Specialists, the standard Lacerator Carbine possesses much lighter accelerators, a much shorter barrel, and a lower heat tolerance.

Capable of shooting metal spikes at (by comparison) low velocities, and with vastly reduced power with ferrofluids, the Lacerator Carbine packs the least punch out of the standard variations. However, it's also the cheapest. Still just as accurate as it's larger siblings, the Carbine's rounds are still of respectable speeds, although they do not possess the same corona of plasma that crowns the others.

Fires steel downrange, punching through armor and jamming into concrete at 120 rounds per minute. 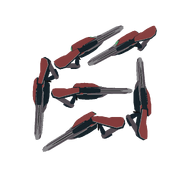 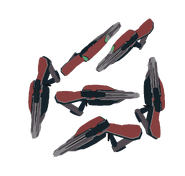 Add a photo to this gallery
Retrieved from "https://irkempire.fandom.com/wiki/Type_223_Rail_Rifle?oldid=42609"
Community content is available under CC-BY-SA unless otherwise noted.