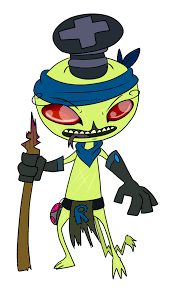 Turk is one of the most remembered leaders in his homeworld of Pandora. He was also known as the ruler who was killed by Lex's drones after he refused to use one of inventions he claimed to be boring work.

His personality appears to be a very wild one from the Convyer Belt Planet. If he was alive today, he would be more ruthless to his enemies and might destroy the Irken Empire.

Like all the Screwheads, he appears to be light green, light clothing, and a huge screw lodged in his forehead.

Retrieved from "https://irkempire.fandom.com/wiki/Turk?oldid=44104"
Community content is available under CC-BY-SA unless otherwise noted.