"-And you call this a 'small' place?" - Invader Averii's first impression.

A High-Class penthouse suite atop the renowned Crystalline Heights apartments on Irk, Suite 1201 crowns the North Tower of the Complex and is owned by Captain-turned-Barkeep, Talbolt, and is shared by Invader Averii and his assistants, Vil and BLU.

Located within the Capital Megacity of the Irken Empire, it allows it's residents easy access to both the sprawling nightlife below, as well as a range of governmental installations and parks.

Built about four centuries ago, Suite 1201 has been host to former-Captain Talbolt for most of it's existence now.

Initially a suite during the Crystalline Heights' days as a Hotel, it was reserved for the stays of the wealthiest individuals. Featuring various luxuries and wide-open space as well as boasting a marvelous view, then-Adjucator Talbolt acquired ownership of the Penthouse many years ago after it's previous owner expired, and has held on ever since.

Over the years, he's made it more and more homely, and with the recent addition of Averii, things have been focused more and more on security. In fact, since he moved in, the windows alone have been coated in various laser-resistant materials, and have been reinforced with all sorts of things.

In fact, various Automated Security Turrets line the interior, waiting to be activated at the slightest provocation. A lone Air Defense Unit awaits the order on the roof as well, to Talbolt's annoyance (and Averii's twisted glee).

Containing the spacious ready room, an Airlock, and the Penthouse Landing Pad, the basement is really home to little else. Well, unless one counts the numerous maintenance passages along the short walk from the glorified equipment room that is the Ready Room to the airlock.

On the landing pad usually rests Talbolt's Spittle Runner, and on the occasion that Averii is actually home, his vessel, Rex, can be seen perched on it.

Running below everything, the basement is what it is. Nicknamed the bay by Talbolt.

Large and rather open, the First Floor of Suite 1201 features many different luxuries at it's residents' disposal.

Entered from a long hall at the south end of the building, visitors must take an elevator to the 217th floor, pray to whatever deity they recognize that the gun turrets remain inactive, and hope to be invited in at the main entrance (the southwest corner).

To the left of the main entrance, various art pieces stand and hang, among them a (fittingly) tall statue of the late Miyuki among the various support pillars.

To the right of the main entrance, (and on both the Eastern and Western halves), the main stairs are located, hidden behind various plants and a decorative waterfall. From these areas, individuals can travel down to the basement, up the stairs to the, well, upper floors, or move through a small doorway to the heart of the first floor; the Kitchen and Dining Table.

The Dining Table, an ornate thing with a holoprojector and a chandelier, sits in the center of the first floor, and more specifically, the Kitchen. Overlooking the ready room through some rails, the Kitchen and Dining Table take up a large chunk of the area.

Notably, in the southeastern corner, more art sits around a Piano and a Guitar, which Talbolt and Averii, respectively, play from time to time.

At the North end of the first floor are Talbolt's Office and Room, reached through either of the Garden Halls, or by walking through the Rec Room from the Dining Table. While the contents of his room are not exactly known, his office does have a card table.

Directly outside of his office and room is the Rec Room.

Boasting a home theater system, various films, and even a fully-stocked bar, it's rather open and ready for action at practically every time. Although Averii doesn't spend much time with the theater, Talbolt regularly watches things. When Ave's home, Lek (although stuck in his PAK form) often joins him, along with Vil.

Notably, some of Talbolt's old uniforms are displayed in cases, standing guard over the bar.

Originally nicknamed the Geedunk by Talbolt, but was changed to simply 'The Mess' at Averii's insistence.

Accessed through one of four stairways, the northern half of the first floor is mostly just observation deck, with gaps around the Dining Table and Rec Room protected by railings.

On the East and West halves of the floor are, respectively, a 'Reading' Lounge and a 'Card' Lounge, with each one rather stocked for their assigned purpose. Notably, a few sets of Talbolt's previous uniforms (such as some of his old Adjucator armors) stand guard over them in display cases, like the Rec Room.

At the south end of the floor are the main stairs and a couple restrooms, with the centerpiece of the floor nestled between them; the Dedicated Training Room. Overlooking the Ready Room and Dining Table, a transparent window allows those on other floors to observe, given that the occupants don't close the shutters or polarize the windows for privacy.

Packing everything from a mere treadmill to VR-simulators and Grav-Generators, the room is equipped well enough to rival or surpass most professional gyms. Notably, workout intensities are capable of reaching lethal extremes otherwise disallowed for safety reasons.

Following a workout or stressful day, however, users of the room can ignore the training gear and use the relaxing hot bath, or the sauna. Notably, these two elements were additions personally added by Talbolt.

In addition, nicknamed the Scuttle's Perch in reference to the term 'scuttlebutt' by Talbolt.

Accessible by residents (or the extremely agile) only, the Third Floor is Averii's domain. Guarded by biometric locks, the monolithic door at the top of the stairs is often the end of the stairs for most.

Beyond that are more doors, leading to one of two storage areas, Averii's Workshop (BLU's room, as well as the Security Control Room), with the last set of doors leading to Averii's 'Room' (West), or his 'War Room' (East).

Although rather open, with most of the area outside of the stairs being railings, it's rather private and detached. The Workshop is typically where any mechanical or security related work is done, such as weapon or armor maintenance, whereas the 'War Room' features multiple maps and files scattered around, used occasionally for meetings of the utmost importance.

Averii's room is rather bare, featuring a mattress and a well-organized shelf of various items and pictures.

Notably, the floor between his room and the war room is made of glass, allowing him to peer in on those below him, and he is known to often jump the rails above the Rec Room to skip the stairs when he's heading downstairs. He also has various sets of cameras and binoculars, as well as racks of weapons on the few walls that he has.

Talbolt refers to it as the Loftrack, as it's, well, mostly a bedroom in the loft of the penthouse. 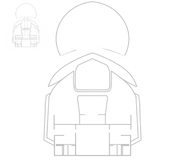 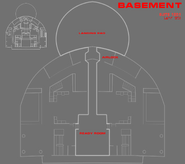 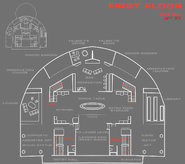 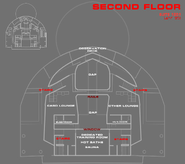 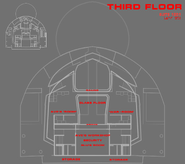 Add a photo to this gallery
Retrieved from "https://irkempire.fandom.com/wiki/Suite_1201?oldid=40029"
Community content is available under CC-BY-SA unless otherwise noted.