Mars is a planet that came from the same system as Earth and is the home world of the Martians.

Mars is a red planet with many structures on it. These structures were built by the Martians and are just ancient buildings that are now useless. The Face on Mars is still functioning as a piloting structure for the planet.

Mars used to be located in the same solar system as Earth, but after Zim had to abandon the planet while riding it around trying to squish Earth, the planet flew into the far reaches of space. It is now orbiting a star close to Irk.

The original inhabitants of Mars were green skinned heads that float using special headbands. They were driven to extinction by making their planet into a navigable space vessel. The current inhabitants found the planet after theirs was destroyed, and claimed it as their home.

The current Martians are green-skinned humanoids with dark red eyes and roundish heads. The average Martian is about the same size as an Irken.

There was a Martian named Martin who traveled to Planet Irk. He helped fight the Meekrobs, and befriended Lurk. Ever since then, the Martians have been allies of the Irken Empire. 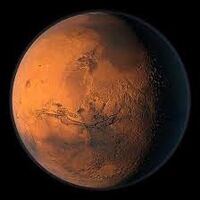 The face on Mars 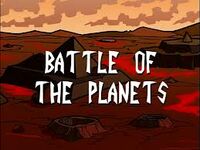 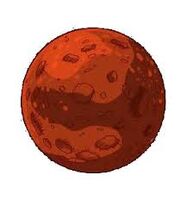 Another shot of the planet from afar 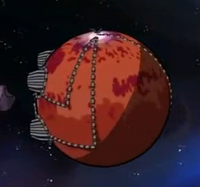 Mars with is engines active 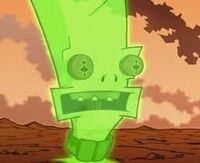 A martian interactive instruction manual left by the Floating Heads.

Martin, one of Mars' current inhabitants
Add a photo to this gallery
Retrieved from "https://irkempire.fandom.com/wiki/Planet_Mars?oldid=40702"
Community content is available under CC-BY-SA unless otherwise noted.