Mario is a Coron-turned-Irken, with both technical skills and experience in combat up-close. Granted, he's a terrible shot.

One of Schmoob's best friends, Mario often accompanies him and others on strange, sometimes dangerous adventures. He can also be found lounging around in Menami's Apartment when he's not on one of the mentioned escapades, or at his rather mysterious job.

He's known for his rather silly companion at times; the one he built and designed from scratch, Hatbot.

Mario started off as a Coron on the planet Veyu as the son of Vok and Nayi Verthon. His life as a Coron was rather ordinary; he didn't have many friends, and he was almost always working hard to support his family.

After a while when his Father and Mother had got rewarding jobs, however, and Mario got rather bored of his ordinary life on Veyu.

So one day, he started to explore other galaxies and planets, trying to satisfy his newfound boredom, and it worked. Ending up to be just the thing he wanted, he went through many a system.

Leading an interesting life with constant new things to learn and explore, one day he stumbled upon a strange planet. A particularly curious oddity.

Spending a year there, he fell in love with the world, for a time, wishing to settle down on it. However, he realized, he couldn't live as a Coron. Not here, on this world, among the rather blocky natives.

So, he decided on one of the few courses of action he had; build a machine, and become like on of the natives himself. Luckily for him, it worked.

A few months later, Mario met Bob. Mario explained to him that he wasn't originally from the planet, and was originally not even one of the natives, and proved it to him by showing him some of his inventions.

After a few years, Mario realized that changing from a Coron into a blocky creature was... Well, far from a good idea.

So, between going back to his Coron origins, remaining a inconvenient blocky creature, or becoming an Irken, he went for door number three. After all, Bob's race seemed like an all-around decent species to Mario, and it would be a step up from the blocky body he had. However, with little expertise in Irken Biology, he asked Xisenin if he could help him out. Fortunately for him, he agreed, and began a long process of transforming him.

From that day onward, in his new Irken body, he'd always join adventures with his friends (and possible enemies).

Mario is a selfless, joking, and (seemingly) happy individual. Despite having his own problems, Mario happily helps everyone with anything they need or may want, for some odd reason.

Notably, Mario seems to break down when questioned too much about why he strives to be so selfless and constantly happy, implying there's a deeper meaning to why he's always in such a state.

Mario is almost always rather sarcastic and silly.

Bob: Bob was Mario's best friend. He always had fun when he was around him. Mario always thought of Bob as the brother he always wanted. Sometimes they'd get in fights but Mario would feel extremely guilty for it afterwards and apologize.

LIR: Mario doesn't know much about LIR, but he always thought his constant silly and wacky shenanigans were cute and amusing.

Sarks: He found him extremely annoying at times, and didn't really like him most of the time.

Vex: He thinks of Vex as a pretty intelligent guy who can be a little bit too serious at times, but he respects how he can take care of a situation fast and smoothly.

Jib: Mario doesn't know much about him, but his recent attitude and actions have led Mario to sorta dislike him.

Zik: At first Mario thought of Zik as an uncanny nuisance. He hated how he wasn't able to visit Menami without Zik barging in. After getting to know Zik, he now thinks of him as a really interesting, nice, trustworthy and friendly guy.

Schmoob: Mario has been through a lot with Schmoob, and he cares a lot for him. Schmoob was there for Mario during his toughest times and he appreciates that.

Menami: Mario thinks of Menami as the sweetest person he's ever met. He appreciates how she's usually constantly nice and positive. 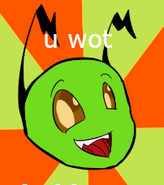 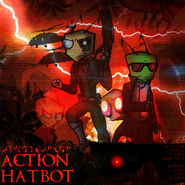