Incomplete at this time. Please check back later.

Imbued with some of the sharpest eyes available, Ensign Lek, Marksman and qualified Med-Tech, used his vision quite effectively. Both in staring down his sights at a target, and ogling the females... When not unreasonable.

Though his Irken Body has long since rotted away, eyes flash-boiled and a hole burned through his skull, his mind still continues to survive within his PAK, protected and possessed by his friend and then-leader, Averii.

Read this if you want to get the gist of things without the extra large textwall.

Born 169 years ago in a standard gestation capsule, Lek was in the Irken Academy for 100 years, like most others. During his time there, he was somewhat relaxed and social, and displayed a proficiency with firearms, but not so much in socializing with females. He has tasted the 'knuckle sandwich' multiple times, but like a true Irken, has shrugged it off with ease.

In the academy, his best friends were the Irkens Averii (antisocial but efficient, now an Invader) and Mit (short, liked explosives). Later, the female Entra would enter their circle, and she would also add to the number of times he was punched in the face or otherwise threatened.

Upon graduating, Lek would be assigned the role of Marksman as he entered Military Service, issued a 'Heavy Lacerator', which is for all intents and purposes a big, heavy railgun rifle. He would then take a posting with Averii and Mit aboard the Viral Tank Vengeance for Four Years, forming squad 223, which would later coincidentally involve Field Technician Entra after their previous expert was killed. Averii would remain commander of their squad, even as they rose through the ranks and gained more responsibility.

Lek himself would direct supporting dedicated marksmen or drones as their years went on, ultimately reaching the rank of Ensign upon conclusion of this assignment.

For the next two years, Squad 223 would collectively decide to serve aboard a Science Vessel. Averii would be Chief of Security, Entra the Technical Specialist (of course), and he as Ave's second-in-command. As for Mit, what he did during this time was widely forgotten and thought insignificant despite his occasional nightmarish screams and complaints of strange surgical-looking scars on him.

Jokingly, Lek would encourage Averii and Entra to begin a relationship during the large amount of quiet time they usually had. That is, when Lek himself wasn't trying to hit on her, anyway.

Bored, the squad took an assignment directly on the front, within one of many battalion-like legions dedicated to fighting the Meekrob. They then ended up spending the next two years planted firmly in the same few miles, struggling to survive as advances and attacks into and from trenches, caverns, tunnels, and more emerged day after day. Lek would even consider fleeing and stealing a ship to escape at times, even accidentally firing unnervingly close to friendlies in fright as the pressures began to reach him.

Averii actually contacted him on advice on what to do, which then directly led to the formal beginning of Averii and Entra's relationship through another joke, albeit only a half-joke.

When service in those horrible trenches ended, the squad eagerly took to garrison duty on Irk, living out of a shared apartment and required only occasionally to check in and attend things.

After that, however, they'd sign up for another decade-long tour of duty.

Ten years aboard the Vengeance again, and more exciting. The Irken-Vortian schism, the rift created by Tallest Miyuki's death, had been torn open. An Irken Adjucator, a prime warrior dispatched to root out corruption and defectives, would take command of the vessel for a few months, even, culminating in the one time Ave was actually allowed to shoot, kill, stab, and/or generally maim Lurch. Unfortunately, Lek would be caught in a bomb blast that was initially blamed on Mit, but he'd recover. He'd even become a full Lieutenant under Averii, who got Lieutenant-Commander and kept 223 in one piece.

Service aboard, after quite a few years of adventure, ended quite painfully during a pirate ambush. Lek's biological life, in fact, was ended as he took a shot right between the eyes, removing a damaged helmet in combat.

However, thanks to the marvel that is Irken Technology, his mind's still at least partially alive in his PAK, providing advice, chats, and overall company to Averii. Though, he has attempted more than once to try and steal BLU's body, or squeeze in with Mit in Ave's ship.

Appearance and Equipment of Note[]

Lek's second best friend, former commanding officer, and current 'Guardian', in a way. Averii and Lek first met in the Academy, initially (for a brief time) rivals. However, they soon found themselves rather balanced, and at Mit's insistence became friends.

In the Military, Lek served as Ave's voice of (un)reason, providing conflicting opinions, views, and methods to help give perspective, or find better ways to get the job done. He's also served as a more casual adviser in other matters.

Following his body's death, Ave discovered the consciousness within Lek's PAK first, as he was attempting to communicate not long after death through the device. Initially rather traumatized in part due to the fact his brains were fried, Ave and Mit eventually helped him adjust.

Today, he continues to serve as an adviser to Averii, though they've grown a bit more distant due to the fact one's still a living and complete Irken, and the other is a metal PAK, a shell containing the ghost of it's former owner's active memories.

Something of a little sister to Lek, he often taunted her. In response, she often made threats she seemed very intent on carrying out unless he quit whatever line he was on.

Female that Lek typically made advances on while on the Vengeance, rival marksman. 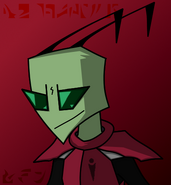