Invader Eternal was in Operation Impending Doom I. She took over three planets, before she was called back to help take down Zim. That was Eternal's first run in with him. He tried to kill her. Luckily, Invaders are trained in many martial arts, and she knocked him unconscious with a flick of her wrist. One of the old class SIRs got a quick pummeling in, too, before he was hauled away for interrogation, and exhilation. (That actually means he was exiled, not he was annihilated. Mores the pity)

Then, in Operation Impending Doom II, she was more hopeful, and she could practically smell success. 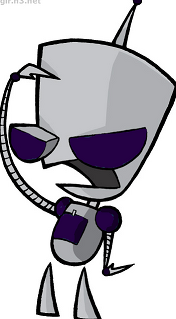 Unfortunatley, Zim got in the way again. She came to this pitful planet as an accident. Eternal was really on her way to Marshonia, a planet that is, essentially, one giant marshmellow. It has been orbit it's sun for thousands of billions of years, and it has gotten molten hot. Luckily, hot marshmellow melts in your mouth.

She was prepared to eat her way through Planet Marshonia, when Zim's ship crashed into her, while he was distracted by his SIR unit's insessant singing, and he didn't even notice. Eternal's SIR unit and her fell in a death spiral towards the Earth, but she landed on the moon. She quickly realised that to fix my ship, she would have to ask for Zim's help, but so far she had not found him. As her search continues, she grows angrier and angrier. Soon, her quest will not be for help, but for revenge, that he left her stranded on this planet of filthy humans.

Community content is available under CC-BY-SA unless otherwise noted.