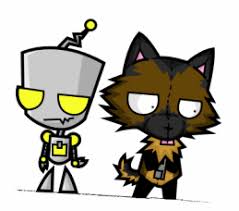 CIR (Crazy Issued Revival) is an SIR Unit that was created by an unsuccessful enigeer in Vort. CIR went crazy after being programmed and the enigeer almost die before CIR was hosed down. It was stashed in a secret storage until CIR was used for Um's plans to take over Earth. CIR looks like it changed because it didn't try to kill Um as he goes to Earth. It was revealed by Um that the engineer came back to CIR and fixed its parts. CIR can even help Um as he deals with Danee.

CIR has the same appearance as GIR but his color is yellow rather than teal when not being disguised. While being disguised, CIR looks like a Earth typical dog except CIR can go crazy sometimes, which might relieve Um's an alien to the human population.

Retrieved from "https://irkempire.fandom.com/wiki/CIR?oldid=44089"
Community content is available under CC-BY-SA unless otherwise noted.