A harsh and infamous Irken Penal Colony, Arraak Prime (Pronounced Are-rack) can be rather lacking in life and plenty in hostility with it's semi-toxic atmosphere and temperature extremes meshing with acidic lakes, treacherous terrain, and high gravity. The common storm usually leads to pouring acid rain, a planetary-rotation augmented sandstorm, or a mixture of both that creates an unpleasant and rather lethal slurry.

However, it's also loaded with extremely large quantities of ore, vital to the Empire's unyielding march, and the conditions create quite the unique training environment.

Not to be confused with it's infamous nightmarish counterpart.

Arraak Prime orbits Giedi Secundus in a highly-elliptical orbit path. A year on Arraak lasts 4 Years, 2 months, and 6 days, during which it alternates between three different seasons. An Arraakeen day lasts 192 hours, or eight days. Thus, a year on Arraak will last 4584 Arraakeen Days, or 36672 Standard.

The seasons of Arraak are: Winter, which occurs three times, at the beginning, mid, and end of the year; Summer, which occurs twice, once between each winter; and Fall, which happens four times total, between Summer and Winter.

Around the planet is it's moon of Kharaa, and a ring reminiscent of Humanity's Saturn, likely left after a comet, asteroid, or small moon smashed into the world long ago. In the rings are orbital defense stations, information-gathering probes, and various labor yards devoted to activities such as ship construction.

Kharaa itself is another story, but suffice it to say there are many deadly creatures, some smarter and more hivelike than others.

Vegetation is relatively sparse across the entire planet, but one can find it more commonly the further North and South they head from the planet's Equator.

Weather can be near non-existent to extreme, due to the lack of a climate control system, though even rain can be highly hazardous. Due to the atmospheric chlorine, most of the rain is actually hydrochloric acid, which is highly unpleasant to say the least. Sandstorms can arise in the deserts and plains of the world as well, and wind speeds can reach over 200 kilometers per hour.

There is little influence from the moon of Kharaa on the climate and geography of Arraak.

Appearing rather purple-pink from orbit, Arraak Prime possesses a wide range of terrain. From plains of sand dunes, to mountains and vast canyons carved by acidic rivers and beasts long gone, the land is very varied. The poles are home to rather sizeable glaciers, which commonly melt quite a bit during the daytime and freeze over again at night, creating a constantly changing landscape.

Notably, the tallest peak on the planet is also a Volcano, named 'Old Lucille' by most of the unfortunates assigned to work the planet's mines. Gravity is also only a bit higher than average, registering 1.2 Gees due to the rather slow rotation of the planet, with it's size compensating a bit.

On Arraak, the air alone can kill, at least during the day. Chlorine is prevalent throughout the planet, the primary reason for the high acidity within the little water on the world, and when the sun evaporates the puddles and pools of chlorine that form overnight, that gas mixes with the oxygen and moisture in the air.

This results in a semi-breathable but lethal mixture, as well as hydrochloric acid from the interaction with air moisture. Extended exposure to unprotected eyes can result in blindness due to chlorine interacting with water in the eyes, creating more acid. The same goes for any water on the body.

Aside from Oxygen and Chlorine in the air, there's high concentrations of iodine and nitrogen, which contribute to the purple-pink appearance of the planet. Most of the oxygen on the world is provided by Irken Atmospheric Processors, as well as native plants.

Chlorine is given off by most of the native subterranean animals, as well as by melting of polar caps, which consist primarily of water, and partially of chlorine that has solidified or liquified.

Notably the poles have lower concentrations of atmospheric chlorine.

Arraak is home to no sentient life, as far as Irken science is concerned. However, above and below the surface there are quite a few lifeforms, most notably the mighty and aptly-named Arraakeen Digworm, large creatures capable of burrowing through the toughest rock with ease. Domestication attempts are commonly unsuccessful on these creatures, unfortunately for the miners, though they are promising candidates for the Gladiatorial Arenas.

Arraak is also home to a subspecies of Brainsucking Grood Bat, known as the Bone-Crushing Arraak Fly. It is unlikely that they originated on the planet, but they are found here more than anywhere else. 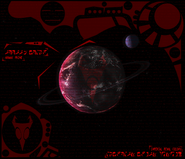